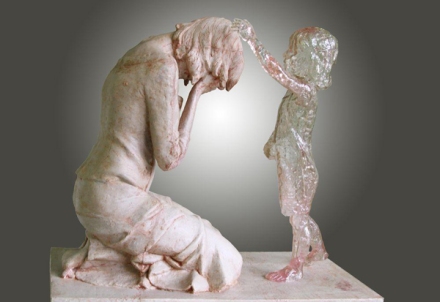 Writer’s Note: It’s estimated that 10 to 25 percent of all pregnancies end in a miscarriage – a term doctors use to describe any pregnancy that ends on its own within the first 20 weeks of gestation. While a specific cause of a miscarriage seldom can be identified, some suggest that as many as 70 percent of first-trimester miscarriages are caused by some form of chromosomal abnormality. I suspect these relatively high percentages are why couples often wait until after the first trimester to share the joyous news of a new pregnancy. It’s also why so many suffer in silence when they and their child become part of this heart-breaking statistic. In 1984, we were one of those couples.

I don’t know why you were on my mind on this morning’s walk or why you’re still there several hours later. It’s been years since I last thought about you.  Maybe it’s all the talk of late about a woman’s right to choose, about whether it’s ever too late in a pregnancy to terminate it, or whether it’s moral or ethical to decide to terminate one at all.  Maybe it’s my recent willingness to revisit old wounds, to sit with the unprocessed grief that surrounds them, and to allow myself the grace to gently and lovingly apply the few missing sutures necessary to fully and finally bind them up and let them go.  Maybe, as I stand at yet another crossroads in my life and think about all of the important people who have come and gone, the relationships that were and weren’t, the moments that affected me most profoundly, it’s only natural that you would come to mind.  Maybe it’s a little bit of all of these things – and so much more.

Still, I’m not entirely sure why, more than 30 years later, your visits still bring the spontaneous outpouring of tears they do. Is it because I allow myself to wonder what it would have been like to meet you for the first time, to hold you in my arms, to see you smile, to kiss you goodnight, to read you bedtime stories, to watch your personality unfold, to listen to your laughter coming from another room, to hear the sound of your footsteps, to dry your tears, to comfort you, to play with you and watch you play, to share your schemes and dreams, to watch you shine and be there to help you up when you fell – to have the privilege to be your dad?  Or is it because I realize how fundamentally different it all might have been with a family of five – breakfast and dinner table conversations, sibling rivalries and relationships, morning and bedtime routines, summer vacations, school and extracurricular activities, photographs, and memories. Likely, it’s because of all of these things – and so much more.

I’ve called you “Sarah” for purposes of this note, but the truth is: I don’t know whether you were a girl or a boy.  You and I didn’t get that far.  I picked Sarah because I like that name – and the people I associate with it – and because I realized today, among other things, that I always envisioned you being a girl.  Perhaps that’s why, while I didn’t want your mom to know, I was terrified when I first learned you were inching your way into our lives.  I had no clue how to be a parent, let alone how to parent a little girl. I was still trying to figure out what it means to be me, but I was eager to learn and committed to being a good dad – the best dad – no matter what it took.  It’s just that I never got the chance to show you that (and so much more), because, seemingly as soon as I started to get my head around it all, around the thought of two becoming three, you were gone.

As has often been the case in my life, I felt the need to be strong (mostly for your mom) and, consequently, held as many of my tears at bay as I could, because I knew that she too was heart-broken by your loss. In time, we moved on, as life demanded.  We started a family the following year with the birth of your brother and, two years later, your sister.  Each has a very special, other-centered heart and lots of gifts that make them engaging, uniquely beautiful, and fun to be with. You would have enjoyed and loved each other – immensely.  What I most want you to know, however, is that I loved you (and still do); that, given the choice, all of us would have chosen life with you, rather than to live it, as we have, without you; that I’m sorry we never had the chance to meet; and that I live in hope that maybe someday we will.

With All My Love,

It’s difficult to put into words what it’s like to be in a room with a few hundred like-hearted people who are willing to embrace their truth (even though that truth might be a bit messy, uncomfortable, and painful); who feel safe and have been given permission, by the warm tears and nodding “me too” heads of those around them to be authentic and transparent; and who understand the transformative power of vulnerability. I was in that space a few years ago at the National Eating Disorders Association’s Annual Conference in Chicago, where I was invited to be part of a panel discussion exploring the complex relationship that exists between dads and daughters, and it was of the one of the most beautiful and humbling experiences of my life. What made it doubly special was the fact that I had the privilege of sharing it with my fellow panelists, Drs. Margo Maine, Michael Berrett, and Beth Hartman McGilley, all of whom I have long admired and respected for their selfless dedication to bringing hope and healing to others – and three front row friends, Joanna Mercuri, Alison Smela and Dr. Angie Viets, who not only “get it”, but get me. If ever there was a recipe for unforgettable – for what it’s like to feel fully human and lay your soul bare – the events of that Friday afternoon were it.

When the session was over and the last of those who had approached me on the dais to exchange a hug or offer words of appreciation had moved on to my fellow presenters, I settled back into my seat, emotionally spent, and tried to take it all in. I thought about the man, father, and husband I was when this most improbable of journeys began more than a decade ago. I thought about how hyper-critical and judgmental that guy was, how intolerant of mistakes and impatient he had become, how much emphasis he placed on “doing” at the expense of feeling, how confident he was in his ability to fix things and others, how little time he devoted to listening, and how badly he had missed the mark where loving his daughter the way she needed (and deserved) to be loved was concerned – all despite his best intentions. I wondered if, in the midst of the fear, anger, confusion and denial that surrounded him in the days after learning of his daughter’s illness, that guy would have been able to hear the message of hope I’d just delivered, believed that it was possible to learn how to be a better listener, to be more patient, to tolerate, if not celebrate his and others’ imperfections, to allow empathy and compassion to take the place of judgment, to let go, to trust, and, in the process, achieve emotional intimacy.

And then I thought about how far that guy had come in those ten years – and the paradoxes that made that growth possible. I thought about how it took our daughter “losing her voice” for me to find my own and our hearts to learn a new language that now allows them to communicate with each other more honestly and lovingly; how it was the pain caused by the swallowing of her truth and the strength it took to later speak it that gave me the courage to stand in mine; how it was her insistence on isolation and, at times, defiant pulling away that taught me the importance and power of closeness; how it was the walling off of her heart that served as a catalyst for me to finally start unpacking mine; how it was her reluctance to communicate that re-kindled my long dormant love of letter writing; and how it was the seemingly impenetrable darkness of an insidious disease that shown a light on all that, unbeknownst to us at the time, was in such desperate need of healing. “That’s an awful lot of life to squeeze into one decade,” I thought to myself. Do I wish all of it could’ve happened without someone I love more than life itself having to suffer so much? You bet. Would I trade the man I am today because of it for anything in the world? Not a chance.

As I got up to leave the meeting room, I remember a young woman approaching me with tear-stained cheeks and saying simply, “Your daughter is lucky to have you for a dad.”  I smiled and thanked her for that, because it was the right and polite thing to do. But, the truth is: I’m the lucky one. What happened in that room, the gifts and lessons learned that made it possible (i.e., the humility, the courage to open my heart to a group of strangers, the empathy, the vulnerability, etc.) exist only because I have been blessed to have her as a daughter.